publish and be damned 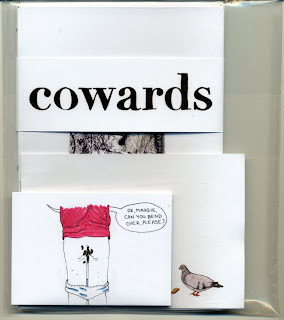 package of my three most recent comics:
'cowards/carnivores', 'maggie' and 'pigeon'

it's a week till 'publish and be damned':

Publish and Be Damned Fair 2009

Publish and Be Damned are pleased to announce the 6th annual self-publishing fair which will take place at Oxford House in Bethnal Green on Sunday 27 September from 3pm-8pm. Surveying a wide range of independent local, national and international publishers of magazines, fanzines, journals, diaries and periodicals, Publish and Be Damned celebrates publishing as a creative and critical space for presenting artists' work. As with previous years, the fair celebrates experimental approaches to making and distributing the work of artists, writers and musicians outside of the commercial mainstream. In addition we will have room dedicated to performances and talks throughout the afternoon.

This year's fair also marks some new initiatives for Publish and Be Damned. Our recent participation in Subvision in Hamburg as well as the London fair are opportunities for us to collect content for the new publication 'The Damned' which will be distributed to all PABD members. The membership scheme, which has also been implemented this year, enables the creation of a forum or network between members that encourages the exchange of publications and participation in PABD's events throughout the year. The funds received from the membership fees has also allowed us to hire a larger space than in previous years, enabling us to invite more participants as well as help fund the attendance of more international publishers.

Publish and Be Damned is taking place in conjunction with the Whitechapel Artists Bookfair, which will be held from Fri 25 - Sun 27

i'll be selling my comics there. come along.
Posted by maartje at 09:42

well that gets me curious! (the photo of your three comics; bring it over bring it over, we want it in berlin)

your wish is my command. i'll get some ready and send them over.

Am v. pleased to be an owner of Maggie and Pigeon. Really enjoying looking and re-looking at them.

Thanks also for the suggestions of comic artists you gave me. Great stuff.

thank you. happy to hear the recommendations made sense.

nice to meet you the other day!