news of all varieties

20th century first holy communion card
when i went to sleep last night i promised myself a lie-in. i was still tired from meeting a deadline for a course i am doing and i felt as if i was coming down with something.
at 0930 hrs this morning there was a knock on the door. still groggy and far from fully rested i stumbled downstairs to open the door to what i was hoping to be the postman with a parcel. instead two kind individuals were wanting to bring me good news. not wanting to encourage anybody instead of my usual 'sorry, i am an atheist' i went with 'sorry, i'm not interested'. they nodded and moved on.

however much i wanted and needed i could not get back to sleep. so i got up, made myself some breakfast and started reading the new york times. there i first came across this article, and then this. coincidentally both articles mention the influence of the in this case roman catholic church on respectively women's and children's rights and science.

two friends
although i could not find the excellent guardian supplement on abortion, which i think was published in 2006 and which featured one or more very eloquent articles by zoe williams. some other articles she wrote for the guardian on the subject of abortion and reproductive rights can be found here.
Posted by maartje at 11:50 No comments:

jimi gherkin made me aware of the fact that chapter 2 article 49 of the coroners and justice bill is currently being reviewed by parliament. there is some concern as to how this may affect comic artists, writers, publishers, readers and retailers.

quality is not a chance

this weekend i ended up joining hin chua on one of his photographic exploits along the thames. we stocked up on pasties and jumped on the train to gravesend from where we wandered to higham. it was a bit of a trek but the sun was out, the company good and the food mediocre, what more could anyone ask for?

the aptly named gravesend owes its fame to being the last resting place of pocahontas. who we found immortalised in a mural just outside the station. (that's her on top of the bearded ginger white man on the left.)

on our way to the thames we passed an industrial area, where on the side of a van we found the following sage advice: 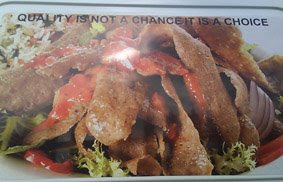 a couple of meters on we took this short course in hand signaling: 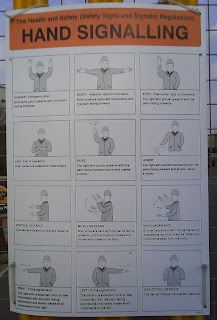 and rambling and clambering on, passing a power station and shooting grounds, dangerous waters and three separate forts we encountered some more signage. i was impressed with the trepidation of the wee man looking over the edge at the water and the other little man's balancing act.

it's not quite gravesend but in february i spent half a day in amsterdam and came across the image below outside of madam tussauds. if i'd had some time to spare i would have taken barry up on the offer. 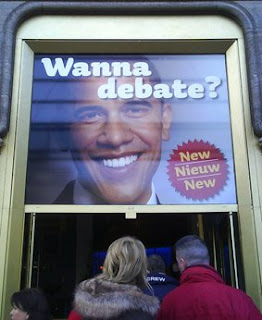 i like knowing that all of the text and images above were carefully crafted by someone somewhere. someone woke up one morning and half asleep thought 'chance...choice...quality... eureka! quality is not a chance it is a choice!' then they got up and spent the rest of the day feeling chuffed.