it's been a little quiet round these parts while i finished a graduate certificate in design for visual communication at the lcc. but let's not dwell on that: back to comics.

some necessary nourishment these past months came in the form of some talks at the ica as part of the comica festival 2009. because of coursework i did not manage to attend as many talks as i do most years or as many as i would have liked but out of the talks i did see two stood out.

first up was seasoned crowd pleaser joe sacco, who i wouldn't have missed for very many things. it was a joy to hear him talk about his work process and influences, the time he spends with his subjects and how he decides what to include in or exclude from his work. it struck me that although several people tried he refused to be drawn into any overtly political discourse. considering the already political nature of his subject matter and the fact that the politics at hand are so complex, i appreciated his reluctance to enter into discussion. and his work is about people; their stories and accounts of events are what history and politics are made of. i can understand that for sacco there is no need to add to that in any other way than through his storytelling. a recent interview with him can be found here and paul gravett linked to some footage and a more comprehensive review by simon hacking here. 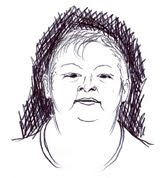 next came helen mccarthy (the little portrait above really does not do her justice). although i am not generally inclined to reading manga her talk on osamu tezuka's work was fascinating. full of examples of inspiring frames, panel lay outs and narrative constructions made all the more engrossing by helen's own enthusiasm for his work. most of what i took away from this talk was visual and difficult to verbalize, but it will definitely stay with me for some time to come.

both talks were an excellent way of stirring up the dust that invariably settles in my mind. i already look forward to next year's comica festival offerings.
Posted by maartje at 18:05 No comments: