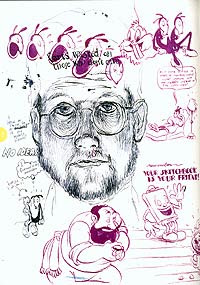 chris ware, p. 52 from the
acme novelty date book volume one
tonight was the night: dan clowes and chris ware were in town in honour of clowes new book 'wilson'. the talk was chaired by audrey niffenegger, whose work i am afraid i am only familiar with from film posters, but who apparently also writes comics. something to look up.
it took a while for things to get going and i couldn't help wondering if the evening could have benefited from a different mediator. audrey might have seemed an interesting choice because of the various links between her, chris and dan (chicago, comics, film) but she was a little too timid and it was difficult to tell how familiar she was with chris and dan's work. maybe chris and dan would have been fine without a mediator or maybe paul gravett (who organised the talk) himself could have taken audrey's place.
audrey wisely opened up the talk to questions from the audience early on and things warmed up. although it would have been nice for the talk to have gone on a little longer and maybe for some of the questions to have been taken more as conversation starters.
i don't know what it is exactly that i look for in these talks. maybe it is just to turn the abstract ideas i have of these artists into something more real and three dimensional. for all his self-deprecation and self-consciousness chris ware came across pretty self-assured and witty at times. and i had imagined dan clowes as someone out of one of his own comics, instead he reminded me of frank mandersloot, a tall bald man with a sense of humour who taught me at art school.

chris ware for 'this american life'
different artists are important to you at different stages of your development and for me chris ware more or less kicked things off. when i first read it around christmas 2004 'jimmy corrigan' showed me that a comic can take its sweet time telling a story and that the idea of what a comic is or can be isn't static. comics have only just begun. 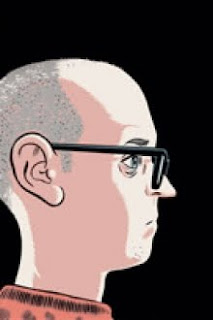 dan clowes
i didn't bring any books to sign but after the talk i queued up to give chris and dan copies of some of my comics. one on one contact during signings can never last long, but the very short chats i had with them made me leave (to meet sarah mcintyre down the pub) with a smile on my face.
to see that both authors really look rather human in real life have a look at gosh' blogpost on the talk.
Posted by maartje at 23:02 3 comments: