the beginning and the end

the inimitable ellen lindner has been labouring on the latest issue of 'whores of mensa'. the theme of which is 'parties'. to make sure this anthology sees the light she is asking people (that includes you!) to pledge any amount of money you can spare here at kickstarter.com. please go have a sneak peek at the new issue and pledge a dollar or two or ten or twenty-five. the issue will feature stories by lots of great artists as well as a 5-pager by yours truly. 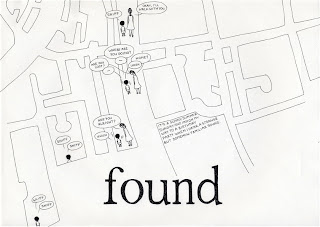 unfinished page 1 'found'
my contribution is a story chronicling an encounter i had last summer on the streets of london.

the drawing style i chose is quite simple, i couldn't really draw it any other way. less straightforward and more time consuming was the end of the story.
using mainly stories based on true events i usually know how my stories end. the points of a story can some times be harder to figure out, but in this case they were relatively clear to me too. 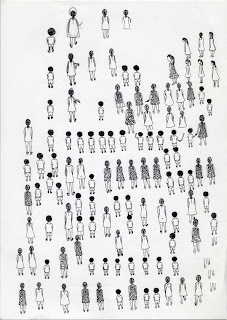 studies for 'found'
what troubled me was finding the right pace and carrying this through consistently. i decided to use a map as the lay out for the story and this limited me to 5 pages. as it turned out i could have used an extra page..or two. initially i solved this problem by upping the pace from slow to high in the last page and cramming a lot of information into the running commentary. an obvious mistake.
there was no time to alter the format, so i had to edit the ending itself. because the story is based on true events this meant using a bit more artistic licence than i am used to. i had to re-examine what events were important and which were less so. some elements could fit into dialogue but other information still had to be conveyed through commentary. i ended up taking out a lot of detail which was important to me, but which i realised the reader could live without and material which told the reader more about me than it did about the story.
it isn't yet possible for me to tell whether i managed to make it work. get your hands on an issue of 'whores of mensa 5' when it comes out at the end of the month and maybe you can tell me.
Posted by maartje at 14:50 2 comments: