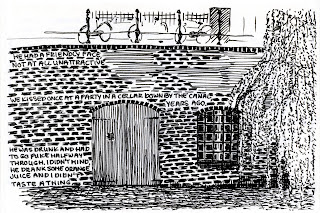 panel from just friends/love stories 2006
as an awkward 16-year-old i met brink scholtz, equally awkward and similarly aged. i had spotted her before, walking the stretch between our two school buildings in a leather jacket whose original owner might have been a middle aged man. she seemed more out of place than other schoolmates. i don’t remember exactly how we became friends, but i do know that meeting her changed everything.

in a small attic room underneath a window in the roof we sat and sipped rooibos tea and spent hours together talking. with every cup of tea i understood more that life didn't have to be governed by the rules of my lovely but claustrophobic dutch grammar school surroundings. that there were people who lived differently and that they were fine, happy even, just as i had hoped and suspected.
at the end of the year brink left utrecht to return to south-africa with her family.

i once took the bus from amsterdam to heathrow airport, london, with my mum to see brink there for 12 hours whilst she and her family waited for a connecting flight. we met in south-africa twice and after i finished art school we worked and lived together for some time at garvald, a residential day care centre for adults with learning disabilities in scotland. then at the end of 2004 she had to return to south-africa again and i left for a three-month stint in new york.

last week we were in utrecht again sitting next to each other on the couch sipping tea in an apartment she was staying in as part of a 6-week cultural program organized by de buren and vrede van utrecht -for which she is writing a story that mentions utrecht. outside the sun was shining.
i came back to london last friday and -ash clouds allowing- today she’ll return to grahamstown,

listen to the beautiful story brink scholtz wrote for radiobooks here.
Posted by maartje at 13:23